Head injuries are common in accidents, and can remain hidden unless correctly diagnosed. In Maryland, Virginia, the District of Columbia, as well as the rest of the country, 1.7 million people will sustain traumatic brain injuries annually, according to the Centers for Disease Control and Prevention (CDC).

Head injuries are a contributing factor in 30.5 percent of all injury related deaths, with vehicle accidents (including car, truck, motorcycle, and bicycle) being the leading cause. There is also a high prevalence of head injuries in nursing homes. Traumatic head injury emergency department visits have been steadily increasing each year according to the Maryland Traumatic Brain Injury Advisory Board.

If your head injury was caused by another person, the justice system is here to help you recover for your damages. Allow Bruce A. Blaylock to handle your legal claim.

Attorney Bruce A. Blaylock has 30 years civil litigation experience representing victims injured by the intentional or negligent acts of others. In that time, he has developed the legal skills necessary to take on responsible institutions but also the ability to emphasize with victims in need. He also brings years of knowledge to this type of injury as he once worked as an Emergency Medical Technician.

Contact Bruce A. Blaylock at 301.951.1800 to arrange a free consultation to evaluate your potential claim.

Head injuries are caused by a bump, blow or jolt to the head and are serious conditions that may cause permanent disability. Symptoms range from mild (a brief change in mental status or consciousness) to severe (extended periods of unconsciousness or amnesia after the injury), according to the CDC.

Concussions are the most common type of head injury. Typically, a concussion results in a short loss of consciousness. It can also result in a minor injury to the head or brain itself. Skull fractures are also common types of head injuries as the skull is particularly vulnerable. These fractures press or pierce into the brain tissue, creating devastating effects.

A head injury can also give rise to complications in other parts of the body. These complications could include seizures, infections, vascular injuries, pain, bed sores and even organ system failure in unconscious head injury patients.

According to the National Institute of Neurological Disorders and Stroke (NINDS), the symptoms of a head injury can include:

Head injuries do not always manifest immediately following an accident. According to the National Institute of Health, it could take several days or even weeks following the incident for a head injury to manifest.

Lost income is also a common result of head injuries. A recent study found that 52 percent of survivors of serious head injuries were moderately to severely disabled one year following their injury, according to the National Center for Biotechnology Information.

The study further found that many victims never fully recover their social independence and ability to work. Four years post injury, the study found that most head injury survivors lived with their families and neither worked nor attended school. This places a heavy burden on their families.

Relationships with friends and family are further burdened by changes in attitude and the difficulty of concentrating and remembering. Mood disorders are also extremely common following a head injury and there can be a high risk of suicide.

Head injuries are often referred to as “invisible injuries” because they can be hard to diagnose. Unfortunately, there have been instances where individuals have filed fraudulent insurance claims in an attempt to obtain an undeserved recovery from an insurance company.  Insurance companies can be tough on head injury claims as a result. Having an attorney with a reputation for honesty and trustworthiness can help your voice be heard in our increasingly litigious society.

Mr. Blaylock’s office has a reputation with insurance companies for only representing legitimately injured people. He and his team adhere to a high level of ethics and integrity, both professionally and personally.

Contact Bruce A. Blaylock and his team today for a free and confidential consultation.

I was hit by a car from the rear and I am happy that I had Mr. Blaylock represent me. I always try to refer people to Attorney Blaylock now. Continue reading → 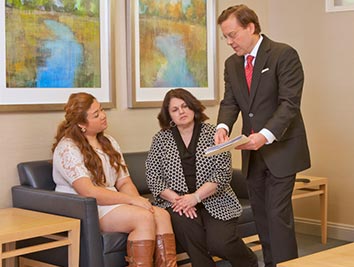